This is my grandparents, who after 55 years are still in love with each other.
A stroke ruined the part of my grandma’s brain that controls speech ability, and so she hasn’t spoken for almost 7 years. My grandpa’s hearing has failed him gradually since I don’t know when.
One can’t speak, the other can’t hear. But their eyes always light up at the sight of each other. And it’s plain to see that for them, that’s enough.

My grandfather was admitted to a hospital several weeks ago. My grandmother insisted to visit him every morning. As she walks into the room, he would say proudly to the nurses “Have you met my girlfriend? She’s so pretty isn’t she?”. Since grandma can’t speak, all she does when she visits is take a chair at his bedside, and hold his hands. Sometimes they hold hands while watching TV, sometimes while gazing into each others’ eyes, sometimes they even fall asleep while holding hands.
Old people can be so stubborn, especially my grandpa in particular. He often refuses to eat, and nothing we say or do can make him eat. Then grandma comes to the rescue, just by glaring at him, or trying to feed him. Like a 5 year old, my grandpa obliges sheepishly.
I am a skeptic when it comes to love, but they continue to prove me wrong. Now I regret that I never probed deeper about their courtship. Who made the 1st move, where did they meet, where did they go on their first date, when did they know they were in love?
I sincerely hope I will have a love story this beautiful and longlasting…
And for my grandparents Uti & Aung, I’m so grateful they did. 🙂 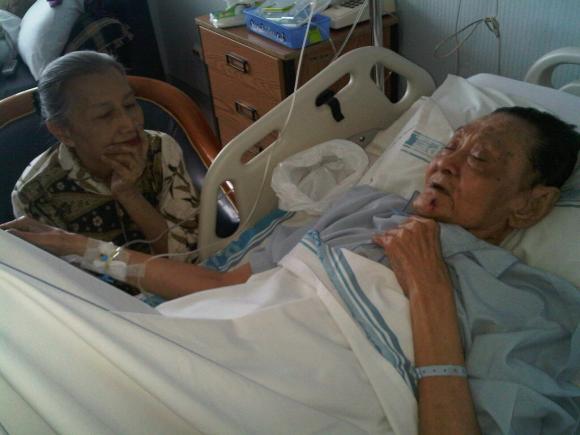 corporate slave by day. poet by night. rock chick by default.
eats cupcakes with a sip of nonsense.

7 replies on “test of time”